This Easter was our first one being married and we weren’t sure what it would look like here in Tanzania. 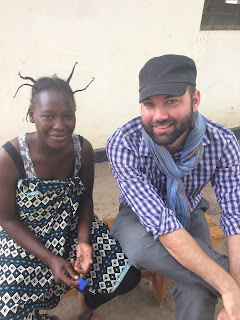 We arrived at Bibi Mimi’s Girls’ Home at 8:00 A.M. to a lot of girls sitting around: some preparing food for their Easter dinner, while others were eating their morning chapatti and eggs or just hanging out. We decided to join them and enjoyed a cup of chai (tea) as the girls slowly started to appear wearing their “Easter dresses.”

The girls usually wear their “Sunday best” but this was even a step up from that. They wore dresses made from kitenges (African waxed cloth) to fit just right in bright traditional Tanzanian patterns. Their hair was oiled and braided in even more elaborate and intricate designs than usual. I was glad that I had decided to wear my bright blue and red dress that the girls think is particularly fancy. 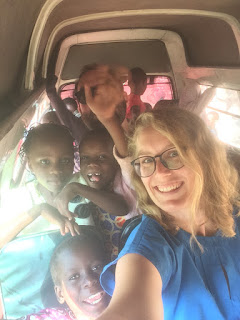 Before long, the dala dala (taxi bus) was here and the designated ‘round one’ of girls, including mostly those who were in the choir, were ready to climb, pile, and squish aboard the flat-faced, public transport van. All the choirgirls first; Jeff and I next. Then came all the littles, sitting on laps and squeezed between passengers. The final touch was a few local kids and random churchgoers catching a ride along the way. It was crowded, but couldn’t be more fun. Every bump and hill was the equivalent to the kids’ first roller coaster ride. With heads hanging out windows, it was the ride of their lives. Amidst lots of bouncing, shouting, and laughing, we arrived.

The girls proclaimed they were not nervous for their performances but you could feel the excitement from all of them. We got our prime seats under a mango tree in case those overcast clouds decide to open up or alternatively, the sun burns them off and the heat gets too much. ‘Under the mango tree’ is a phrase we hear often and I’m starting to understand it’s because it’s the perfect place to be in almost any weather.

There was no missing when things got started since the microphones were connected to mountains of speakers. Their amplified voices didn’t stop them from quite literally yelling Hallelujahs. The day included many things. Lots of joyful proclamations, a heartfelt sermon, four different offerings, and of course the singing.

There were all different choirs there to perform for Easter. To see the girls included in their ranks really made us proud. The choirs all had matching outfits made from kitenges. They always had a few main vocalists while everyone else focused on their dancing. The singing was fantastic but the dancing is what made the hours pass. The girls did great with their number and all danced in step with one another. 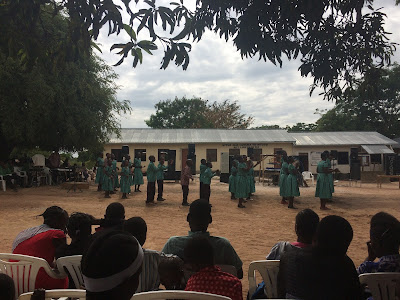 Somewhere around 1pm things began to wind down for lunch and admittedly, we were a little relieved. As fun as it all was, it was a lot and we have come to fully appreciate how exhausting it is to have your brain constantly trying to understand a new and foreign language. It became apparent that we would be staying for lunch. I was mostly just impressed that they planned on feeding this many people. Low and behold though, everyone lined up and filled their plates with rice, beans, and even the occasional piece of meat. As foreigners, we were offered a special meal in a church elder’s home and despite trying to refuse, we eventually struck a compromise bringing some of the girls with us.

This point in the day found Jeff and I in pretty good spirits. I mean it was pretty great to be here with the girls celebrating and learning their Easter traditions. Plus, it was done earlier than we had mentally prepared for. Then “HALELUJAH!!!” burst out across the microphones. I looked to Jennifer, sitting beside me while bouncing a little cherub, I’m sure with a mix of slight anxiety in my eyes and asked, “Is it starting over?” “Mmhhhhmmm.” Wait, wait, wait, is that a yes or a no?? 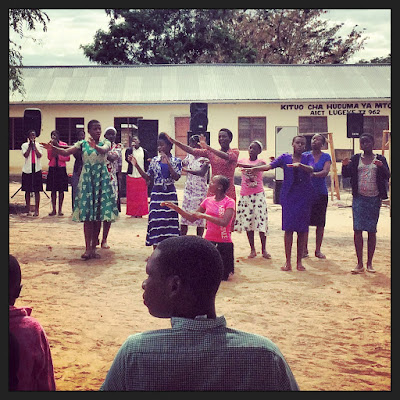 To be fair, the afternoon was even better and I really enjoyed it. It was more free-style now that the bigger choirs had finished. This meant that the girls were up for several more songs or were welcome to grab a microphone and lead the singing while everyone now joined in the dancing. I’m sure the singing and dancing couldn’t be contained even if someone was silly enough to try.

Somewhere nearing dinnertime Momma Maggie asked if we were tired. If a dala dala was going, we were ready to be on it. Not so surprisingly, the older girls were not ready to leave so the littlest girls and us filled up the dala dala once again and along we went, bouncing and giggling home.

At home, we found ourselves heading to prayer with the girls. It’s amazing that they not only had the energy to enthusiastically sing more choruses and praise songs, but they wanted to so much! Afterwards, we shared a special Easter dinner with the girls. They were excited for the special meal and you should have seen how high they could pile their plates. Then the mayhem and giddiness commenced that finally reminded me of home. There were kids everywhere chatting and wolfing down yet one more plate-full. There were bottles of soda everywhere and it’s a wonder they all stayed upright. There was a general feeling of merriment and contentment and I found myself feeling right at home; this place where all things could be foreign while still feeling like family.